The new l’Opificio jacquard fabric collection designed by Serena Confalonieri is inspired by the classical Scottish Tartan pattern, reinterpreted with a contemporary approach.
The tartan pattern has always played a well identified role in fashion and interiors. A symbol of the Scottish territories, it is a textile that seemingly has arrived in the Scottish Highlands around the IV century (Falkirk Tartan), but it is around the XVI century, that thanks to the links of the Alba with the French nobles we find the first references about a textile called TIRETAIN, in Gaelic BREACON, which means chequered, and today called Tartan.
Until the XIX century, the tartan identifies a region or an area. This because it was woven by locals using local natural pigments. Successively it becomes indicative of the clan living in the area.
The tartan has always had a very strong identification character, exactly because it was directly related to a place and a group of people, and this same inspiration is found when used as a pattern in an interior too.
SCOTT, reaps that strong identity characteristic and matches with l’Opificio philosophy of proposing a timeless, thus actual style. 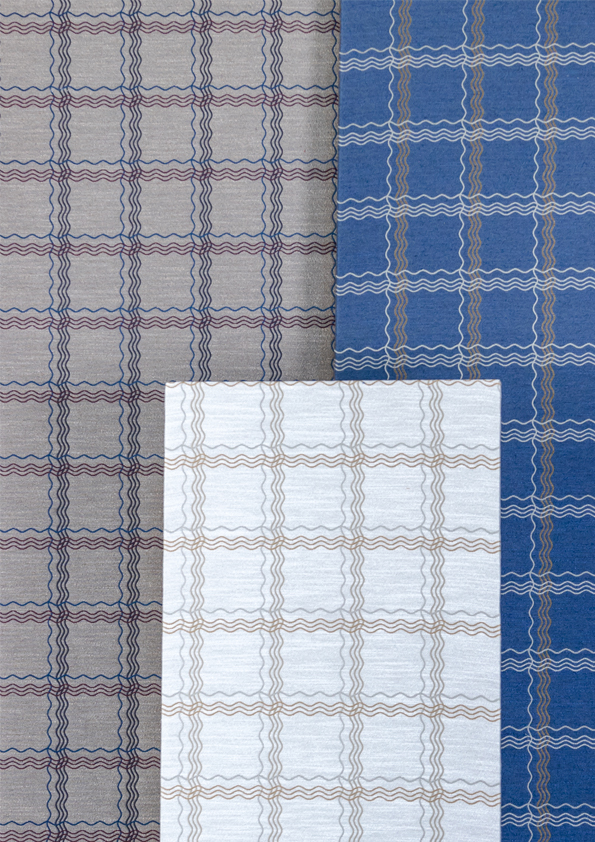 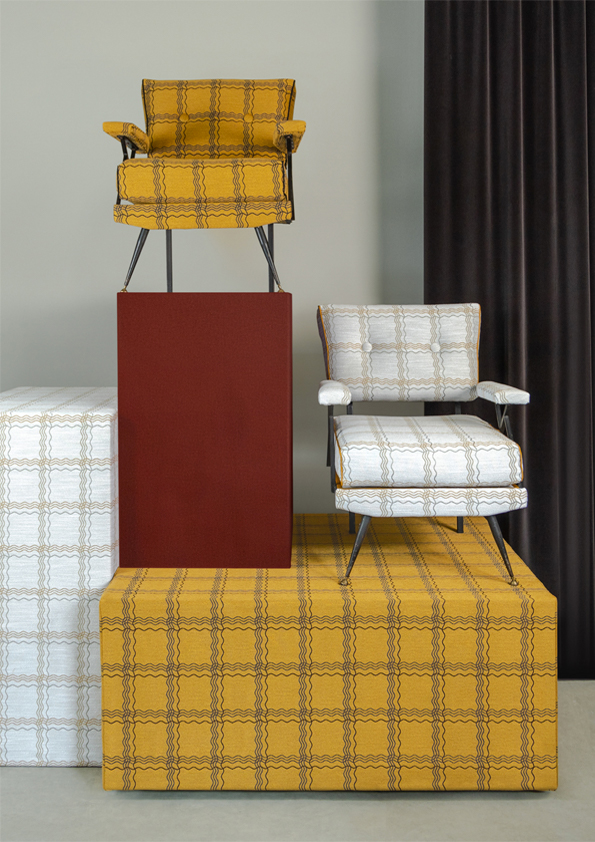 In SCOTT, the collection designed by Serena Confalonieri, the rigid right lines typical of the Scottish Tartan have been taken over by soft wavy stripes, which crossing, create a delicate and refined geometric pattern
The chromatic palette, deliberately proposes some colour variants typical of the Tartan (as red, blue, okra, brown and black) including though, some further tones closer to the interior world such as beige, grey, light blue, pink and terracotta.
The unusual bouclè linen yarn, used in the weft, enhances the visual and tactile perception of the textile and confirms the contemporary interpretation of this classic pattern.
As a result, it is an intense collection which can dress traditional as well as contemporary interiors or it can be included in mountain interiors, in any case, always places with great personality. 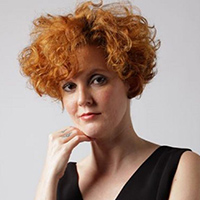 Who is Serena Confalonieri
Serena Confalonieri (1980) is an indipendent designer and art director based in Milano. She works on product, graphic and textile design projects and collaborates with many italian and international companies.Her works are placed in-between product and graphic design: an accurate research on the surfaces is always present in her projects.
After a Master Degree in Interior Design, she started her career working in many architecture and design practices in Milano, Barcelona and Berlin, and collaborating with the Interior Design Faculty of Politecnico di Milano as assistant professor.In 2013 she makes her debut at Milano Design Week with her Flamingo rug, produced by Nodus.
During the years she’s been selected for design residencies and workshops in Italy and abroad (New York, Mexico, Portugal), her works have been published by important newspapers and magazines (The New York Times, Corriere della Sera, Il sole 24 ore, Wallpaper, Interni, Ottagono, L’Officiel, Elle Décor…), she won prizes such as a Special Mention at the Young&Design Awards 2014 and at the German Design Awards 2016 and her works have been exhibited in important locations such as La Triennale di Milano and Rossana Orlandi gallery.