How to evaluate the furnishing textile quality: what does an upholsterer say

In conversation with Gabriele Druetta

There are many important hidden aspects in an upholstering textile, which are fundamental.
Those are the ones that an upholsterer evaluates in a furnishing textile and in this paper, I will address the first two fundamental features.
The fabric we use to upholster a sofa or to sew a curtain is always the result of a complex system made of production choices and different production steps, which are part of the identity of the textile itself. The re-combination of all these choices allows to create textiles, sometimes similar among them, thus that can hide substantial differences when used in specific conditions. The upholsterer work allows to empirically observe these differences and therefore creating a knowledge that will allow to promptly understanding when a furnishing textile has a good quality or when there are hidden problems, which will emerge only by seaming or nailing.
In my day-by-day research of new textiles my hands, even before my sights, are the most important instruments for judging. Being an upholsterer. I will indicate you these elements revealing how to recognise them. I will discuss about the first two main elements that a furnishing textile must have in order to let the upholsterer make a perfect work. 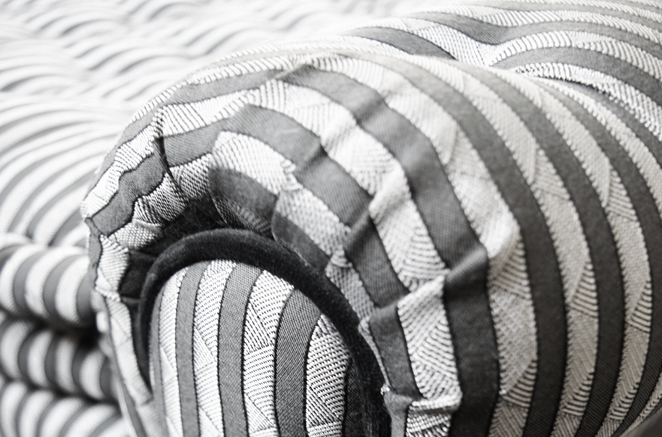 Let’s start from an easy to identify characteristic, which is the capacity of the fabric to “hold the nail” .
When a textile for upholstering looks thick or particularly robust, we tend to think that it is also resistant. Though the word “resistant” has a variable value depending on how and where the textile must be worked.For example, a textile for interiors with a high Martindale number, which means a high resistance to rub, doesn’t mean it can support a punctual traction caused by the nail or by the seam stitches.
If the weave, which means the combination of the yarns of the weft and the warp, is not closed enough, with absolutely tight yarns, tears may happen in correspondence to where the nail has holed the textile. A furnishing fabric that cannot hold a nail normally shows this tendency already during the upholstering work, preventing the upholsterer from applying the correct tension to the textile.

Therefore, don’t be misled by the thickness or solidity of the textile.
The easiest way to test the resistance of the textile to the nail is to pinch with strength the textile between the fingers about 3 cm from the cut edge. With the free hand you keep the textile still whilst exercising an external traction until the elasticity allows. If you observe the yarns moving away or a significant distortion of the weft, this means that the textile probably is not feasible for very tensed applications or for springy or very springy upholstering. Another negative indication about the ability of the textile to keep the nail it is the inclination of the textile to fray when cut. This is maybe one of the most important hidden aspects to the upholsterer.
Upholstery is mostly the art to balance the contrasting forces between push and traction when furnishing. Being able to use textiles resistant to strong punctual stress allows applying the maximum control on the material guaranteeing a perfect work.

All l’Opificio textile collections guarantee this aspect, it means the resistance to the nail, in such a way that for some of them I was almost astonished for the specific resistance. For example, an apparently light textile as the Loop collection doesn’t show any kind of laceration even when tensed with air-pressurized instruments on hard wood.
In the making of a large mirror, made of various upholstered elements combined with mirror pieces, I tested the incredible robustness of this textile that supported me in furnishing complex geometries without too many folds or excess of material. 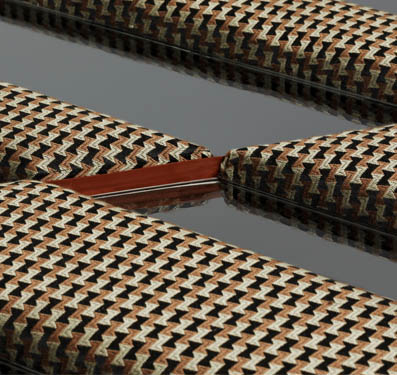 And here is the second very important hidden characteristic, from experiencing this textile: the oblique elasticity.
For an upholsterer, the elasticity of a furnishing textile is not always an advantage; on the contrary it can be a problem, especially when using textiles with geometric patterns, which require particular attention in the alignment. The textile cannot deform autonomously under the pressure caused by the structure or the padding. To avoid this, the furnishing textile has always a very contained elasticity in the direction of weft and warp. But it is of great support, if the textile has a moderate oblique elasticity in respect to the yarns.
When a furnishing textile has this characteristic, it results easy to apply on complicated forms compared with textiles uniformly less elastic. A textile without this elasticity will result rigid and will act as a piece of paper which opposes the tensions without being able to adapt to the form. Because of the tensions folds and bulges will appear, which will be difficult to be smooth.
When talking about the capacity to “hold the nail”, the more the better, on the contrary for the oblique elasticity it is important that it is balanced. In fact, should it be too much, we will have a textile that respond in a irregular way to the tractions with the evident difficulties in working with it, especially when using seaming machines.
Velvets are textiles where oblique elasticity is of particular importance. All furnishing velvets interact more than other fabrics with light, intensifying exceeding tractions or creases.
Velvet with the right oblique elasticity allows distributing eventual folds or creases that turns out during the upholstering.
Among l’Opificio velvets I recently worked with, the velvets where I mostly appreciated oblique elasticity and static nature of weft and warp are the Velluto di Cotone and the Velluto di Seta collections. When the furnishing velvet I hold in my hands reveals this hidden characteristic, I am absolutely sure that I am working with a textile meant to give the best results. 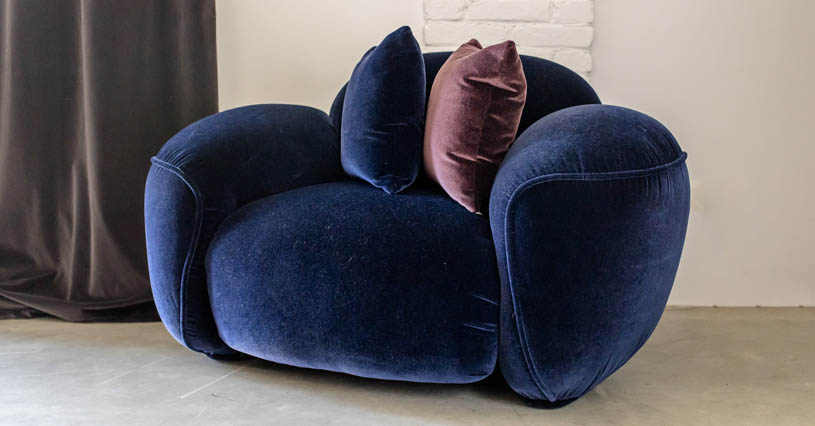 The research behind this hidden balance is the real added value which only few companies stand out for, and they are part of the brand identity of l’Opificio. These two hidden aspects of the textile for upholstering are only the first ones of a long list of details and experiences that have been hand sown to me from the two previous generations of my family and distinguish the Italian craftsmanship for excellence.
Textile has been the first technological material invented by humankind and as all raw materials it responds to hidden rules that can discovered only by working with it. 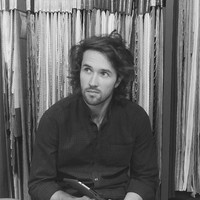 Gabriele Druetta was born on 18th September 1985. He grew in his grandfather’s and then father’s workshop developing, since a very young age, his manual skills.
His passion for arts doesn’t prevent him from attending a scientific education. Thanks to his degree in Architecture he found a balance between his inclination for planning and his passion for research.
His career started as consultant for the development of innovative materials, afterwards becoming a freelancer and furthermore as architectural planner. In 2012, thanks to the experience gained, it becomes more and more evident for him the distance between planning and project execution.
Driven by his desire to take care of the details by himself, in 2013 he decided to get back to his father experience as upholsterer, combining manual skills with the planning capacity, creating a new model of artisanal workshop

How to evaluate the furnishing textile quality: what does an upholsterer say