“When Textile Meets Animals”: at l'Opificio in Turin, the exhibition of Stefania Bonatelli's shoots, which investigate the connection between nature and fabrics design.
In Stefania Bonatelli photographer's shoots, the colour shades of some of the most charming birds in the world's plumage act as a counterpoint to the Turinese company precious fabrics' nuances.

What kind of connection could exist between an armchair sit and a grey heron? Or between a velvet cushion and a snowy owl?“All art is nothing but imitation of nature” quotes Seneca, but he then adds that art is not art if the effect is reached by chance. It's through meditation and wait that human creativity interacts with nature and, by it, builds its beauty vision choosing models and colours which answer to the ideals of the age in which it lives.

This is the creativity idea behind the photo exhibition “When Textile Meets Animals”, presented in Turin the next 27th of October in Via Martiri della Libertà 42, at l'Opificio Show Room, a family-run company, leader in Italy and abroad of high quality fabrics production, 100% Made In Italy: putting in relation the plumage of some of the most iconic and charming birds in the planet with the refinement of the best of the l'Opificio production, in a continuous reference to the beauty that the careful eye is able to catch in nature and the result of the man creativity combined to a “savoir-faire” belief which has always been part of the italian small-medium successful entreprises' DNA.

At work in the elaboration and investigation of this engaging relation, through 15 selected shoots, is the Turinese photographer Stefania Bonatelli, drawing from her 15 years of life in Colombia experience, a land in which nature dominates through the sparkling of intense colours, typical of tropical countries.

From the birds' plumage to the sky from which they come from, from the trees and the sends on which they build their habitat, the textile artist's imagination derived textures, warped silks and brocades on which imprinted lines and shapes, shades and tracks, and sometimes symbols consciously or unconsciously stolen from nature. The fluffy, the soft, the hairy, the polished as well as the rough and the coarse of the fabrics evoque feathers and quills and pelts, skin and cortexes, calyxes and corollas.

The artist captured all these connections, and for this reason the light-blue of a velvet is matched with the shades of sky painted on the plumage of the paradisiacal crane; the vigilant eye and the erect position of the night heron control its head nunaces reproduced on the runners and animalier cushion taken from the jaguar fur. The snowy owl, darkness' sharp observator, is compared to the black and grey tones of its nights and to the whiteness of the “dress”, while the toucans' beaks find their correspondance in the multi-coloured polychrome velvets and in the imitative curves of the stitched cushions. And once again, the crowned crane is well merged with the furnishing objects which drag from its fur, its insolen crest and from the surrounding arboreal nature the unexpected nuances, while from the neck's curviness, the elegant arch of the seats.

Therefore, it's not by chance if “When Textile Meets Animals” will be launched just before the week in which Turin will be the uncontested protagonist of the national and international contemporary art: “In this occasion, my sister Barbara and I decided to step back and let the artist to feel free to work on the pictures and the result has been amazing!” comments Paola Bertoldo, owner of l'Opificio together with her sister Barbara and their brother Federico“The combination of shades and textures between our fabrics and velvets and the plumage immediately captured us, that's why we thought about sharing this moment of surprise and joy, arranging an exhibition. And what better occasion than the Turin 'Artissima' week”. 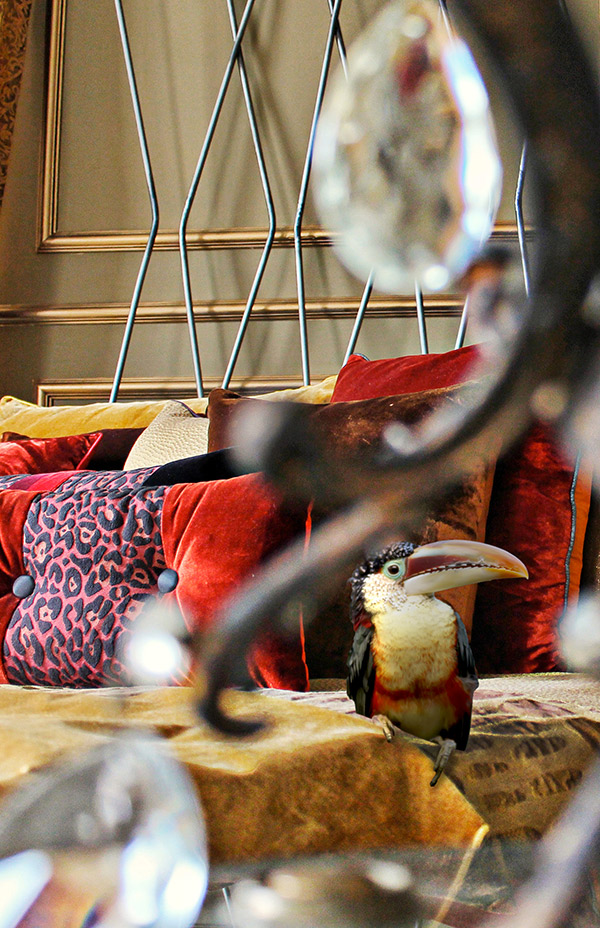 Stefania BonatelliBorn in Turin, she attended and graduated at DAMS academy of the city, where she is currently living and working. After an actor's path, since 2000 she deals with direction and art videos. Due to family issues, she spent her first 15 years in Cali, Colombia, and to these lands she ows her first imprinting. Although she is familiar with the uniform grey of the Po valley's mists, she is more intrigued by the vibrant colours and the scattered vivaciousness of the sunny equatorial deserts, of the snowy summits, of the extreme dryness, of the torrential rains. In these shoots, she seems to instill the unforgettable memory of that country, which overflows with orchids, which hosts butterflies and beetles, jaguars abd armadillos, cranes and toucans, and where even the houses are painted in pink and fuchsia, in light-blue and turquoisie.