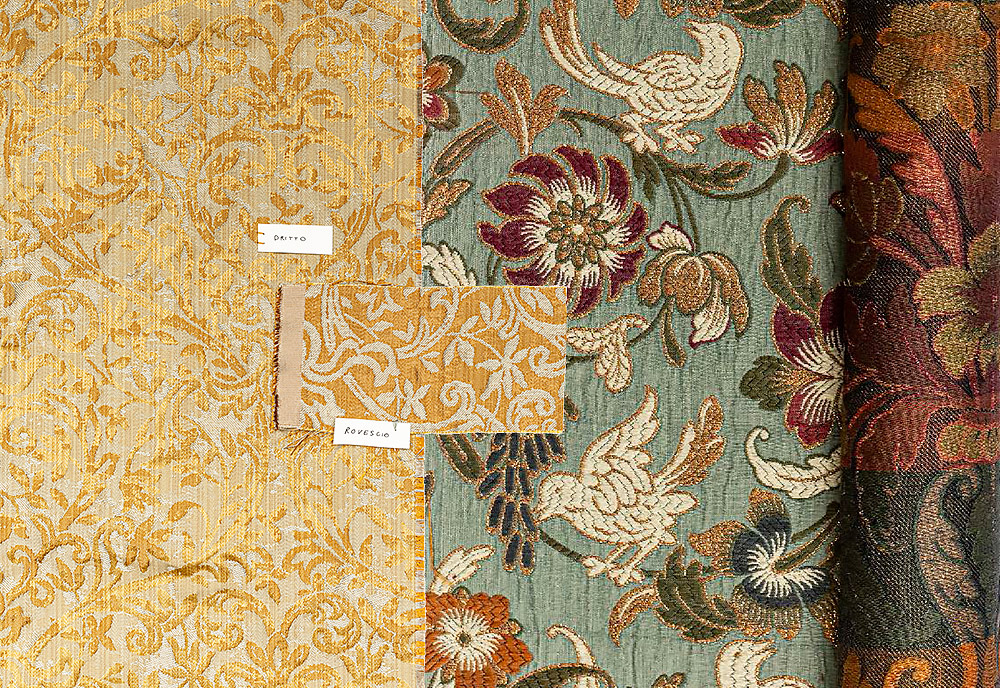 In the previous article dedicated to the discovery of the different types of textiles we presented the peculiarities of fabrics like Damask and Double Damask.
Our last sentence was:
“Damask and Double Damask started to be known around the 1100. Afterwards in the 17th century silver and gold threads were used to embellish the textiles with a relief effect which will lead to the launch of brocade. But we will talk about it, in the next article!”

During our journey among the textiles for interiors we will continue to refer to the Textilarium, which we wrote with the precious support of Carlotta Berta @unprogetto and Cecilia Bima.

BROCADE
Decorative Textile, decorated with pattern resulting from additional warp and weft, added to the background fabric (plain or textured), without undergoing modifications.
Patterns only appear on the right side of the fabric, whilst additional wefts and warp pass on the reverse, completely untied or almost and sometimes cut.

Brocade is a figured fabric with warp elements that features rich embossed designs. This is obtained thanks to uneven weft patterns that do not stretch over the whole fabric, but only cover some areas. Unsurprisingly, its name comes from the Italian word brocco, i.e. decorated with studs, with embroidered thread loops.
It has very ancient origins and it is a valuable fabric, owing both to its yarn, usually silk, and to its complex production process: up until the nineteenth century it was produced with a drawloom, which required as many as two weavers to be operated. Only later was this tradition abandoned, in favour of the Jacquard loom.
Thanks to higher levels of mechanisation, the latter made this fabric more popular and cheaper. Traditionally, since it was a particularly valuable fabric, it was mostly used for producing sacred vestments. Over time it began to be used for furniture, both as padding upholstery and for heavy and bulky drapery.

How to recognise it
Brocade fabric is easy to recognise by checking its reverse side: the design threads clearly stand out on the fabric, and you will notice that the weave does not stretch over the whole fabric, but only partially covers it. For this reason, some areas of the reverse only feature the background fabric, while the surface gives the illlusion that the design has been embroidered on the fabric.

BROCATELLE
It is a textile with large relief patterns over the background. Differently from the brocade, the pattern is made by the warp and the background by the weft. The relief is caused by the contrast between the background, normally as a twill and a pattern in a very dense warp effect satin.
The Brocatelle normally has two warps: one as background and a binding one and two threads of weft, where normally one is in silk. The silk weft can be in two or three colours to outline the drawing better.

Brocatelle, whose only feature in common with brocade is the weft, is a very valuable fabric that originated in the seventeenth century. First produced in Italy, it spread especially in the Caserta area, near Naples, where it was used for sacred vestments and for furnishing noble residences. Today it is also used in furniture as upholstery or for luxury drapes.
That's because brocatelle is a very valuable fabric type, composed by two warps (one for the background fabric and one for picking) and two weft types (a regular one a silk one).

How to recognise it
Brocatelle has a distinctively stiff background, while the relief pattern is usually glossy. It differs from lampas for its design, which is flat and not in relief.

We will tell about it in the next article! 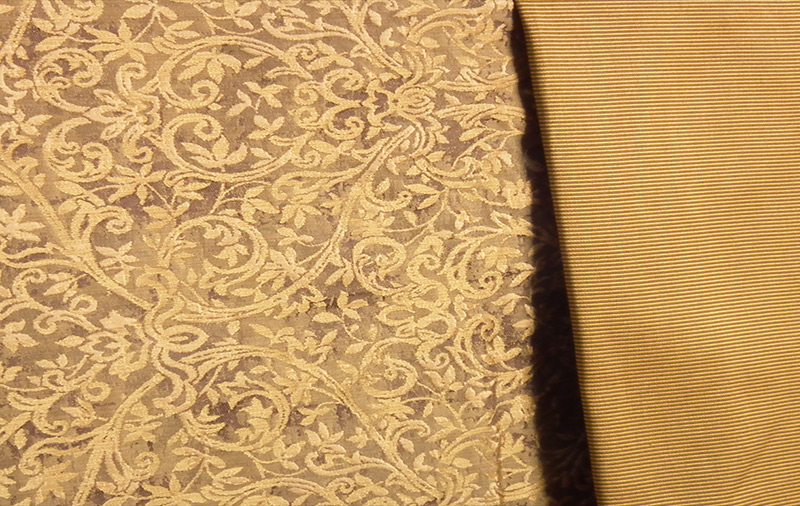