This year l’Opificio turns 23 years of activity celebrating the achieved goal with an artistic edition by Paola Anziché exhibited in its show-room in Turin, Gran Madre area. The family company was established in 1998 to design and produce high-end furnishing fabrics and velvets 100% Made in Italy, respectful of the human being and the environment, totally without formaldehyde or heavy metals. To celebrate the beauty of l’Opificio velvets the company has decided to rely on the sensibility of the artist Paola Anziché who shares with l’Opificio a particular attention to sustainability, to women’s work and to manual craftmanship. The artist defines its work as “seeing with the hands”. There is something ancestral in the artistic research that emerge in her art pieces, as in the case of “Raggio di colore”, the Multiple that dresses l’Opificio show-room in Turin. Paola Anziché says: “in my artistic expression I create soft tactile sculptures starting from a researching process where I explore the potentiality of art to relate with different cultural environments. The manual aspect and the attention paid to the material used (with a specific preference for natural elements) is the cornerstone of my work, which consist in creating pieces that invite to experiment the form. “to see with the hands” is an expression I use to define my way of working where each object comes to life independently becoming a unique sculpture, created and experimented reinventing different techniques. With the manual craftmanship I also combine the conservation of texts and images which have become an archive through which my research is nourished.”
Paola Anziché says “I have always been fascinated by the work of Gio Ponti, as I am passionate of those architects and designer who have been able to create their pieces with a great artistic freedom, collaborating also with sculptors. As for the Hotel Parco dei Principi in Sorrento, where the refined thought-through solutions defined by Ponti reinterprets the light and the typical Mediterranean atmosphere through the use of an extraordinary colour quality. The chromatic associations remind of a typical taste of the ’50 and ’60, where the ceramics, majolica, pebbles were corresponding to the light beams of the landscape-a scenery/colour which becomes part of the architectonical landscape. It is therefore an homage to this passion of “seeing with the hands”, of feeling the light and its colours that Paola Anzichè has created a curtain-sculpture that reminds of the chromatic lightness of the solutions created by Ponti.” Paola goes on “In fact, the vertical progressive motif freely reminds of the light ray through the colour beams”.
The curtain made of Cotton Velvet is the result of the skilful craftmanship of l’Opificio Atelier. The artistic idea has been followed by the creation of the paper patterns, the cut of the polygons concluding in the sewing department where the inlay work has been realized.
The Installation will be presented during an Instagram Live on Friday 19.03.21 at 16:30h during a meeting/conversation among our President Paola Bertoldo and the Artist Paola Anziché. The Multiple will be on show until end of April, at l’Opificio Show-room, Via Martiri della Libertà 42, 10131 Torino, Gran Madre area (hours 10:00 – 18:00 Mon -Sat). By appointment only.
Raggio di Colore
Paola Anziché
Multiplo 1/5
700x 240cm
Velluto di Cotone lavorato ad Intarsio by l’Opificio
Marzo 2021 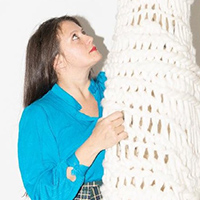 Paola Anziché (Milan, Lives in Turin and Milan) obtained a degree at the Accademia di Belle Arti di Brera and at the Städelschule, Staatliche Hochschule für Bildende Künste, Meisterschülerin, Frankfurt, Germany.   In the summer 2019 the monography La terra suona/ The Earth Sounds has been published by Viaindustriae publishing.  Her work has been exhibited in numerous Italian and international public and private institutions, including the Salvatore Ferragamo Museum in Florence; Turner Contemporary in Margate, England; the Remotti Foundation in Camogli; the Sandretto Re Rebaudengo Foundation in Turin; the Kichik QalArt in Yarat, Baku, Azerbaijan; the GAM -Gallery of Modern Art of Turin, and Careof, Milan. She has participated in numerous international residency programs as Temporars at Muzeum Susch, Susch, Switzerland; Kiosko Galería in Santa Cruz de la Sierra, Bolivia, HIAP Residency Program in Helsinki; SYB Artist Residency in Beetsterzwaag, The Netherlands; RES.O ‘international network for art residencies, Turin; Pact Zollverein Zentrum in Essen and the Centre international d’accueil et d’échanges des Récollets in Paris.   She also collaborated teaching at the College of Art at the University of Technology in Taiyuan, Shanxi, China.