A timeless trendy velvet for life The Velvet (originally called sciamito) is an antique textile that was originally imported in Italy in Venice from the Orient and in Palermo from the Arabic countries already around the 13th century. The first major growth of this amazing textile happened in our country in the Sicilian town Palermo, were the first artisan shops (opifici) were developed and from where, after the Vespri Siciliani, famous Masters flew to cities like Lucca and Amalfi, exporting in this way all their competences. From that point onwards, regions like Tuscany, Veneto and Liguria became centre of excellence for the production of velvets. In fact, since the 14th Century Venice turned into the major exporter of plain velvets, and artisan shops came to life in the city, becoming soon centre of excellence to such a point that it was difficult to distinguish an Oriental velvet from one produced in Venice itself.
It was until the English industrial revolution that Italy maintained its position of major exporter in Europe for the Velvets, followed by France.
At that time, the aristocrats used velvet for their wardrobes as a sign of regalty and richness and for decoration in their homes. The relevance of this textile is represented also in arts as in the frescos of the Ghirlandaio or in the paints of Antonello da Messina or of Bronzino (just to mention a few). In fact it is interesting to see how much attention the artists pay to reproduce the velvets of the dresses, almost the same as to the portrait of the face.
The cotton is one of the most ancient fibres, grown simultaneously in many different parts of the globe; apparently the most ancient was cultivated in India. In Italy it arrives in Sicily during the IX century, thanks to the Saracens.
The criteria that define the quality, it means the classification of the cotton fibre is:
Therefore the best cotton fibre will have to be extra-long, shining, white and homogeneous.
The cotton velvet, as an alternative to the precious silk velvet, is produced for the first time in Manchester, an English city famous for the weaving of cotton textiles.
l’Opificio Velluto di Cotone 100% is made of valuable mercerised cotton expressly spun for the Maison. It is a dyed textile, totally formaldehyde-free and heavy metals free.
To the haptic it results dense and soft, opaque to the sight but with intense deep colours.
The cotton velvet is an eclectic textile, which adds a touch of class to any space. It is perfect for modernist interior of the ’50 or Bauhaus, but it also reinterprets with a modern touch a classic sofa or perfectly dresses a contemporary design chair.
l’Opificio Velluto di Cotone, 100% Made in Italy offers a wide colour palette in 60 tones: from earth tones, to pop colours, from rich red shades to deep intense blue nuances up to the greens or very sophisticated powder colours. 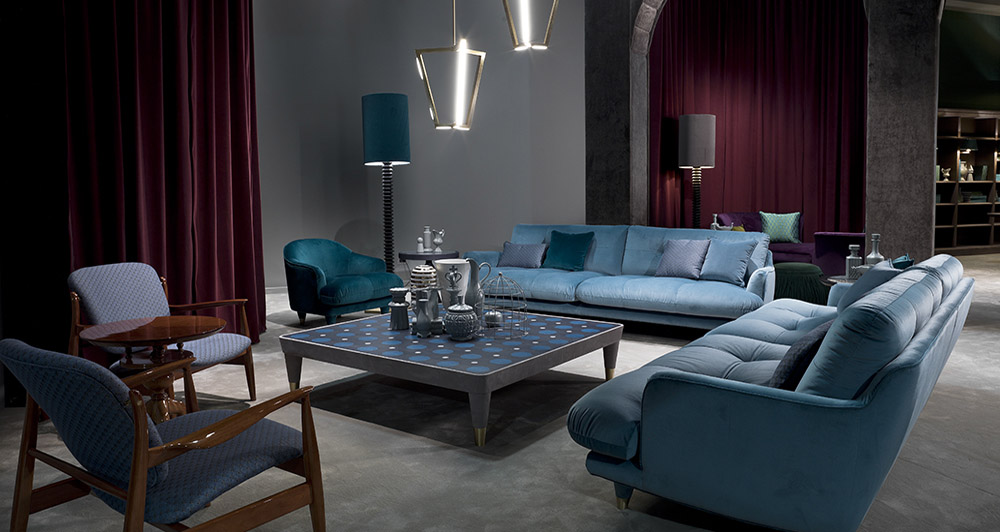