These are the roofs of Turin, no straight lines or angles 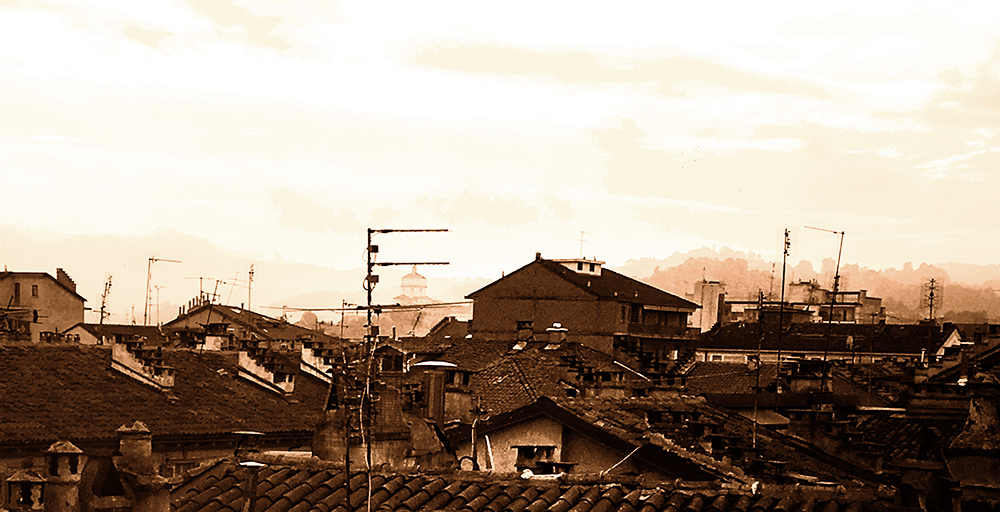 I am living in Turin since a few years now, but I am still trying to understand it every single day, dismantling the stereotypes of the “false but polite” post-industrial giant, clamped in its hushed greyness.

I decided to observe “the city of the car” touring by foot and using the public transport. At the beginning I was considering to use the bike too, to gain an intermediate velocity. I decided for walking and I am happy with it.

The central areas of the city do have a severe orthogonal plan, so rigid that it is impossible to get lost, making it simple also for those who have a zero sense for orienting. Though the city of the long straight streets, where the human sight looks at undisturbed until it is possible, starts to change as soon as the heaviness of the polished size of a front gate opens.

Gradually walking up the staircase, with the help of the wax smelling handrail, or comfortably sitting on an impeccable old-fashion velvet in a clattering old-style elevator, one ascends to another world.

If invited in a top floor apartment, just look out the nearest window to see something apparently incompatible to the underlying rigor. The multitude of roofs is a crowd of clay roof-tiles, chimneys, dormers built in different ways and materials, with a certain inventiveness. Forests of aerials -high, low, medium, small -, terraces with doubtful stacking, real miniature woods, colorful balconies of hanging clothes and the omnipresent green curtains. Electric cables that pop out and disappear everywhere, wooden lodges that overcome every law of physic. Not talking about the people who live, sing and speak for themselves inside the dormers.

These are the roofs of Turin, no straight lines or angles. A place where it is easy to get lost in that city that proves to be much more than what we have always been led to believe.

Petunia Ollister is the “nome de plume” of Stefania Soma. Since 2015 she creates #bookbreakfast, pictures of books on a breakfast table, published on her Instagram profile @petuniaollister. When not reading or photographing, she deals with the enhancement of cultural heritage and communication.

With Slow Food Editore she published “Colazioni d’autore” (2017) and “Cocktail d'autore” (2019). She lives in Turin, she has described books on Radio2, wrote for La Stampa and published photos in Robinson - Repubblica.